Carl Van, Professional Speaker, graduated from California State University, Sacramento where he received his bachelor's degree in Insurance. He began his business career in 1980, moving up the management ranks and ending in Vice President/General Manager of a 600 employee company.

Mr. Van has been an instructor for numerous educational associations, and is the author of over 75 technical and soft skill workshops being taught throughout the U.S., Canada, Newfoundland and the U.K.

He has set up 5 in-house training programs for various companies throughout the nation, and has written articles for many national magazines.

Mr. Van has been a keynote speaker at major conferences around the country, a trainer at an international U.S-Japanese executive training program, a guest speaker at hundreds of association seminars, and selected as the opening presenter at some of the most prestigious conferences in the nation, including the ACE national conference.

Mr. Van is the Dean of the School of Performance, and serves as Regional Vice President of the Society of Insurance Trainers and Educators.

He is the author of a highly acclaimed book on the characteristics of truly exceptional employees.

Other credits include being an arbitrator, a licensed agent, a TASA certified court expert, as well as a national auditor for a federal regulatory agency. 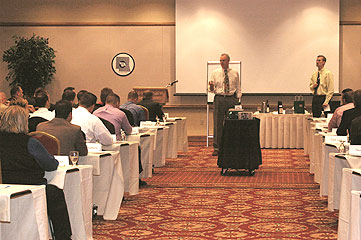